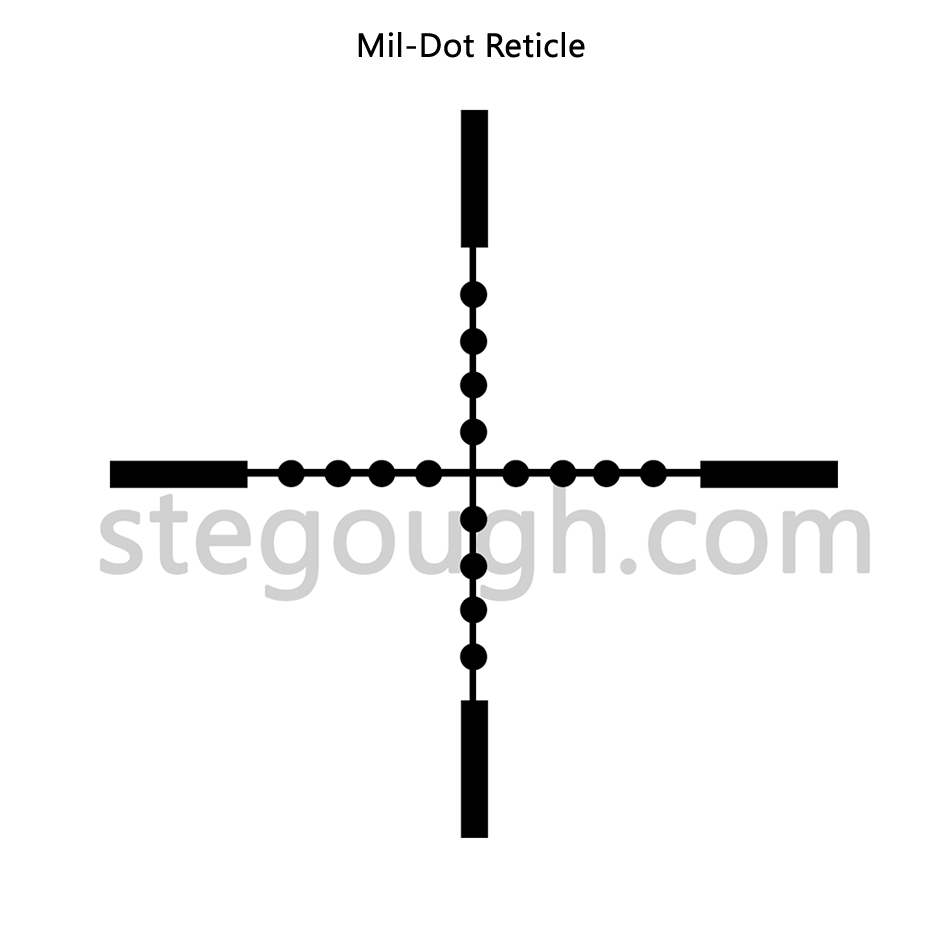 Following on from Understanding Mils, I’m going to try and put that information into the context of Mil-Dot Scope Reticles.

As a re-iteration, 1 Mil is 1000th measure of the distance. For more info read Understanding Milliradians (Mil, Mil-Rad).

So a Mil-Dot reticle is precisely laid out to give known angles at a glance. When you know the representative angles as shown above and what those markings mean at your target distance, it becomes easier to use these for corrections.

For example, if you put a shot on target and it ends up 1 Mil high and 2 Mils Left, you could see the shot placement on your sight and know that you need to adjust 1 Mil down and 2 Mils right with your click correction, OR if time is of the essence you could aim off using the dots and shoot 2 dots right and 1 dot below. Like this:

Mil-dot Correction on the fly (Hold Over, Aiming Off)

So for speed and efficiency, Mil-Dot helps us correct shots that have gone off accurately since we have an accurate scale which we can judge shots.

But that’s not all Mil-Dot can help with.

Since we know the size in Mils of the various gaps or dots of our sight, and we worked out that the Distance (R) is relative to the target size (1000 x) we can use this information to estimate the distance to target.

Say we have a target that’s a known height. A car wheel for instance, that we know is 15″ in diameter. We can hold the sights over the car wheel and use the size of the object in the sights to gauge the angle it is.

This gives us 2 pieces of information, from which we can extrapolate the third. 15″ wheel (Tz – Target Size) is 5 Mils (M – Mils) at our Distance (R). So how do we get the distance?

Since we’re working in Millirads, and we want to find the Radius, we need to start by multiplying our Target size by 1000 which will give us the total of 5 radians at this distance. But we only want to know the distance of 1 so we divide that total by the number of Mils we read.

We would be 3000″ from our target in this scenario. That doesn’t help us much so we need to convert that total into Yards (Or Metres, depending on the unit of measure you are working in.

The Target in this scenario is pretty close.

What about Mil-Dot Reticle Estimation in Metres

It works in exactly the same way as I outlined above, perhaps to make things easier if we estimate the size of our target in a metric system rather than that of ye olde time imperial, it might make things a little clearer.

I’ll make a new picture and work this one out in Metric.

This time the wheel is either really small, or really far away, and since we know the size of the wheel is   38 cm (+/- .1cm) we can estimate the range using exactly the same formula as above.

Convert that to metres – and herein lies the beauty of the metric system, divide by 100 (Or simply move the decimal point over to the left by 2)

It’s pretty darn simple when you use Mils with Metres.

Why did I Estimate Mil-Dot Range with Yards

Well, whilst it is simple to use Mil-Dot buy ambien drug with Mils, and it makes sense, you don’t only find Mil-Dot reticles on Mil-Click scopes. Infact I have 2 MOA-Click scopes with Mil-Dot reticles. Though I only use them for static shooting at known distances the range estimation features are useless, to me, for now. However being able to use the Mil-Dot as a reference point for Hold-Over correction is worth having it in itself, and well, it looks cool, It’s the kind of scope you see on video games and movies, and it’s pretty cool. But now you know how it works, it’s also practical as well as being cool!

When would using Mil-Dot Range Estimation Be Useful?

For Civilians, it would be useful for field target competitions, where you need to estimate the distance to the target in order to score a first round hit. if you know the target is 12 ” you can use the mil-dot to work out the distance and dial in the zero for that distance for a perfect first round hit. Likewise for hunting, where range estimation is everything when taking a shot on live quarry. You don’t always get a chance for a second.

For Military it is invaluable to be able to judge how far away the enemy is quickly. Often soldiers will carry charts of known sized targets at different ranges with their Mil Dot size to range distance. A lot of the time they won’t need it because they train and work with the system so much it becomes second nature, which is the same for hunters, who will often use the dots to aim off to get that quick shot without being seen or heard.

What about on my scope that zooms?

The Majority of scopes on the market are Second Focal Plane, where the reticle stays the same size regardless of the Zoom. This causes issues with everything we’ve learned above. Since the markings stay the same, but our objects get bigger, we cannot use the Mil-Dot to estimate the range, as it would be impossible to judge the exact amount of Zoom and calculate the increase in the reported size in Mils. With these scopes you would have to make sure that all adjustments are made either with hold over as shown above (providing the zoom doesn’t move between shots) OR by calculating precisely how many clicks without referring to the Mil-Dots as reference for how much to click.

So First Focal Plane are where to be if you want to use the markings in your scope, or Mil-Dot Reticle to be able to adjust based on Mil-Dot markings, or Range estimation as shown above. These scopes are out there, but they’re fairly expensive.

For More information on FFP and SFP reticles head to Primal Rights, Inc where they explain it in far greater detail than I have.