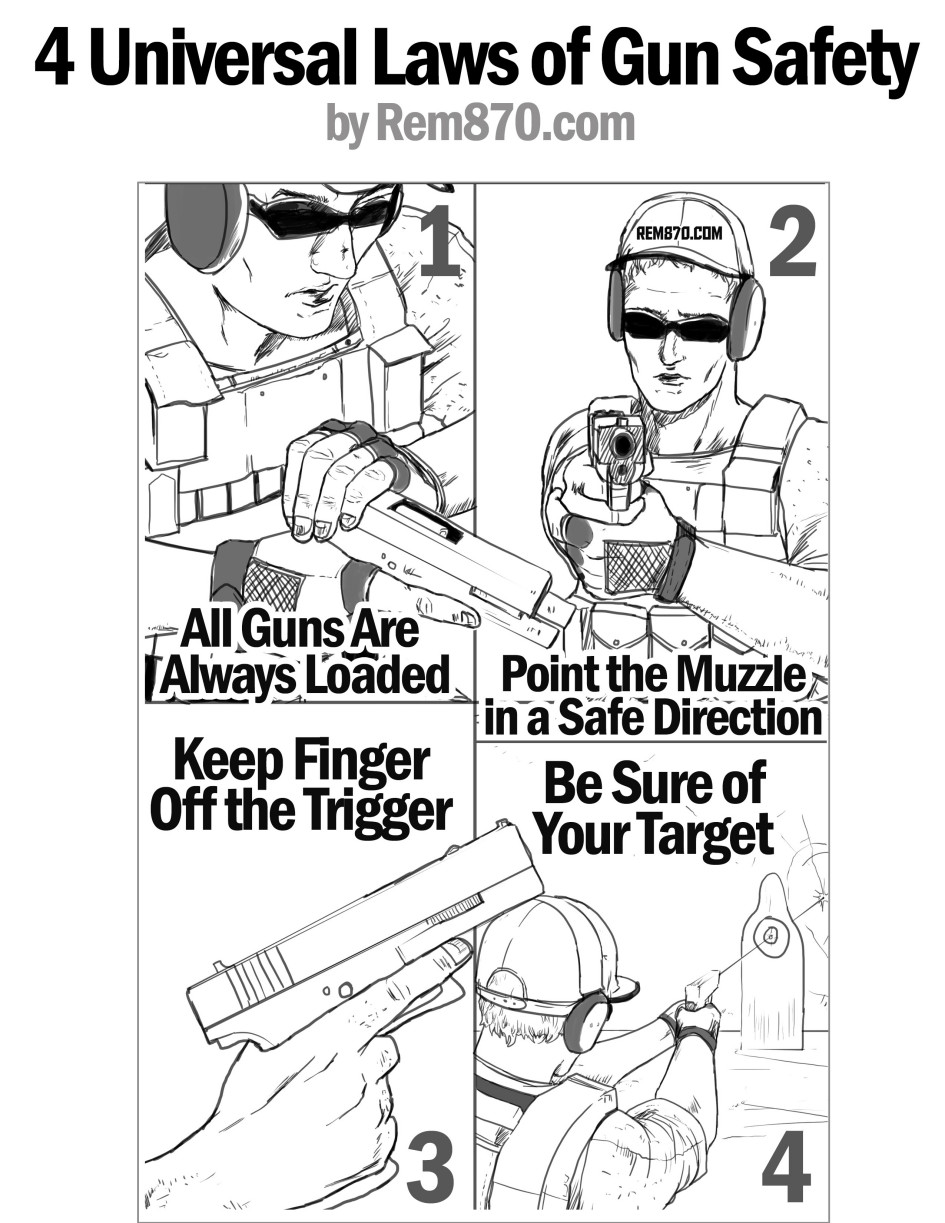 Whenever handling firearms of any description there are 4 cardinal safety rules which must always be adhered to.

All Firearms Are Loaded

This means that whether you know that a firearm is completely empty or not, it is always to be treated as if there is a round in the chamber.

Never cover anything other than your target with the muzzle of the firearm. Imagine the barrel is a laser pointer, whatever the laser lands on is a potential “target”. Always be aware at what it is pointing at.

Finger Off Trigger Until Ready To Fire

Be Sure Of Your Target And What Is Beyond It

Not only should you identify your target, but also be sure of what is beyond and where the bullet has a potential to go. Often bullets go through the target, you should always be sure you can see, or are certain where the bullet is likely to stop if this happens.

These rules are universal at every club or range I have been to throughout the world, whether they are worded in exactly the same way or not, they always apply. Be sure to memorise them and practice them every time you pick up a firearm.

This set of rules was proposed by Jeff Cooper and have since been adopted by the majority of the big names in gun teaching throughout the planet.

There are many acronyms to help new shooters remember these 4 simple rules, I’ll go through some here, hopefully they’ll help you remember and you can pass them on to other newcomers to the sport.

Treat all guns as loaded.

Always point in a safe direction.

Be sure of your target and what lays beyond.

Keep your finger off the trigger until ready to fire.

Treat every gun as if its loaded.

Aim at only what you intend to kill.

Never put your finger on the trigger until you are ready to shoot.

Know your target and what is behind it.

Safe Direction – Always point the gun in a safe direction.

Always be sure of your target and what lies beyond.

Finger is outside the trigger guard until ready to shoot.

Every firearm must be treated as if it is loaded.

All firearms are loaded.

Digit (aka finger) off the trigger until ready to fire.

Confirm target and what lies beyond.

Use What Works For You

It really doesn’t matter if you use an acronym, use whatever method works for you.

These RULES (they are not suggestions) are a way we keep our sport safe for those of us participating and those around us. Always maintain strict discipline.

The way this system works is also pretty foolproof because any one rule in itself should keep everyone safe, so we have a 4 tiered system of safety so that if one rule should be broken at any point, 3 more are in place to cover everyone’s ass, and sometimes (including myself) mistakes happen and rules get broken, we’re human. If you see anyone breaking these rules, let them know so they can check themselves, chances are if they ever get pulled up about it, it wont happen again.

Be Safe, Have Fun.