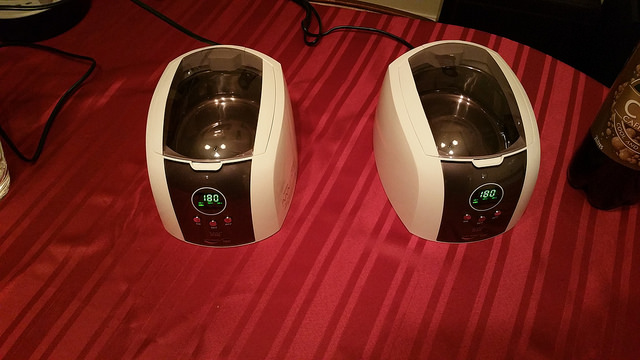 After touching on the process of Reloading in an earlier post: A Brief Overview of Reloading .308/7.62mm Ammunition… Part 1. I had mentioned that some of the processes that I use are constantly evolving and being refined. Here I am going to concentrate on one process in particular that has evolved numerous times since I started reloading. Cleaning brass.

I started out cleaning brass with wire wool whilst turning it on an electric screwdriver. Which was only cleaning the outside of the case, then having to use a q-tip to clear the inside mouth of the brass and also a carbide bit to scrape out the primer pockets.

to make lighter work of the brass. I used this for a few hundred rounds, and for the most part it works very well, however it still needs the primer pockets cleaned out individually by hand as the media I have is too large to get into the primer pockets and clear them out efficiently. So… 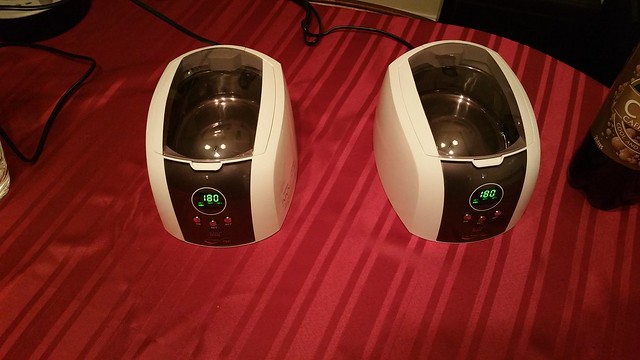 After reading extensively about what solution to use in an Ultrasonic Cleaner, it was apparent that our American counterparts would use “Lemi Shine” as their cleaning agent, often with some detergent of some description (Dawn). Since I’m stuck over here in the “51st state”, where there is an apparent lack of Lemi Shine I had to come up with an alternative. Following more research I found that the active component in Lemi Shine is Citric Acid, so my next call of business, after finding Citric Acid in the UK (It turns out that it’s not quite regulated, but hard to get – many pharmacies don’t stock it, and those that do sell it very begrudgingly. It seems it is used to cut with drugs or something. Anyway, I managed to track some down in Wilkinsons (Wilko’s) in the wine making department. 50g for £1. 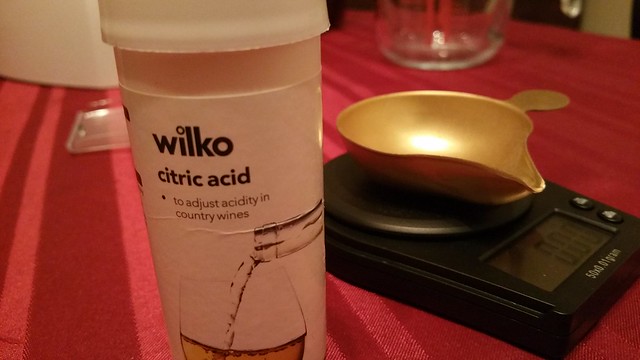 Since I’m using an acid to clean the brass, and the acid has the potential for degrading the brass, especially if left on for long periods of time (like not cleaning it off efficiently) I decided to go for some Bicarbonate of Soda solution as a base to neutralise the acidity. So my second solution was made up in the second ultrasonic cleaner. 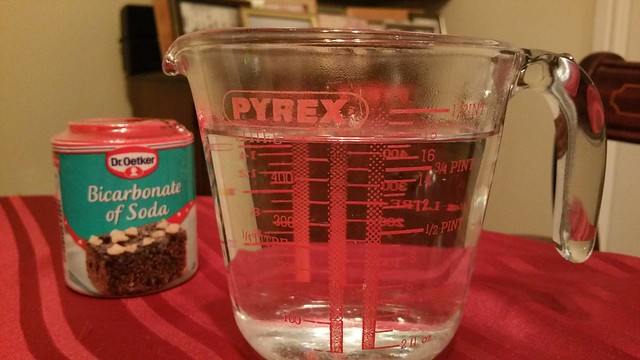 Though I was pretty good in school at Science, I haven’t really had much call for chemistry over the last decade or so, so I had to look up a few things. I decided, based on some research from the internet, to go with a 5% solution of Citric Acid, and a 5% solution of Bicarbonate of Soda. First I would have to figure out how to get to these percentages.

I was pretty much there with my initial thinking which was 500ml of water / 20 (5%) = ml of solute. but since solid chemicals are not measured in ml I didn’t know which measure to use. as it turns out, it’s grams.

Theres a whole host of other things to take into account for ultra precise measuring and mixing when it comes to making solutions from solid chemicals, a user called “UncleNick” on www.thehighroad.org explained it far better than I ever could.

In general, in chemistry, all percentages are by weight. This is because the bulk density of powders are not necessarily consistent. This is due to differences in grain size, moisture content, how much vibration it was subjected to in transport, etc. Anyone who has seen the effect long drop tubes have on stick powder packing in a case will appreciate this.

In cool weather I like fresh bread with dinner, and since my wife hates the effort, the task of making it falls to me. In doing some research, I read an experiment by a cooking science laboratory in which 18 different cooks each scooped one cup of flour, all using the exact same tool and scooping technique: pushing a flat top measuring cup with a handle down into a bin of flour, then raising the heaping cup out and then scraping the top level with a spatula. The flour from each cup was weighed, and the extreme spread in weight was 13%. Just how hard or fast someone ran the cup down into the flour made that much bulk density difference. So, volumetric measuring just isn’t precise.

That said, the citric generic ambien mylan acid level in the arsenal formula is, as mentioned by others, not critical. 5% makes a reusable solution that will do a lot of cases, and if it’s 4% instead, it will still do a lot of cases. I also add a squirt of Dawn dishwashing liquid to the 5% solution to help suspend dirt. But citric acid by itself is a good water softener (neutralizes dissolved calcium carbonate pretty neatly) so the detergent may be doing more to make me feel good than anything else. I really need to run some side-by-sides to see.

Divide 133.5 ounces by 19 to get the amount of anhydrous citric acid you will need to dissolve in a gallon of water to make the combined solution 5% citric acid by weight. That works out to 7.028 ounces. 7 ounces is more than close enough.

So, what is the volume of 7 ounces of anhydrous citric acid? Per what I said earlier, this will vary. All I can do is report the weight of anhydrous citric acid powder I have, as I scoop it and level it from the 10 lb box I bought. A half cup (4 fluid ounces) of the powder weighed 3.83 ounces. The bag is mostly powder with lumps that are not very hard to break up, so it has a bit of moisture in it. I am not set up to do a titration to determine exactly how much moisture, so that just has to be part of the normal error. It would take 7.31 fluid ounces of my powder to get 7.00 ounces by weight. Given the non-critical nature of the mix, if I didn’t use a scale and was forced to use volumetric measures, I would just measure 7 fluid ounces of the powder out (1 cup minus two level tablespoons), and add that to a gallon of water.

What I therefore deduced was that 25g of citric acid in a Pyrex dish and then filling up to the 500ml level would more than suffice. Since I’m not actually a chemist and I just want something to clean the brass. interestingly his 5% reusable figure was more than adequate for my needs. 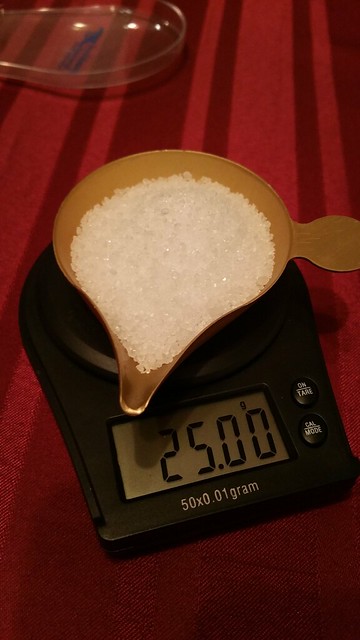 I wasn’t looking for perfection, but this was a happy coincidence. Not quite so accurate with the bicarb. 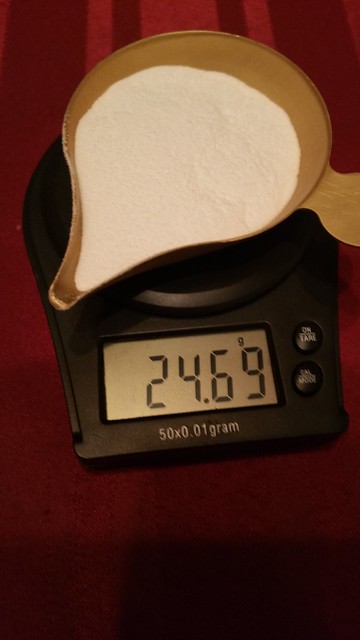 25g of Bicarbonate of Soda 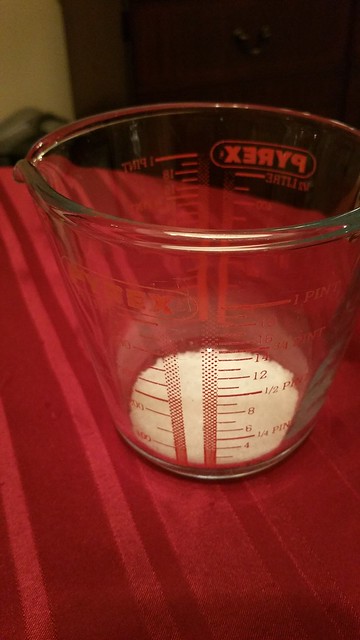 Powder into the Pyrex first. 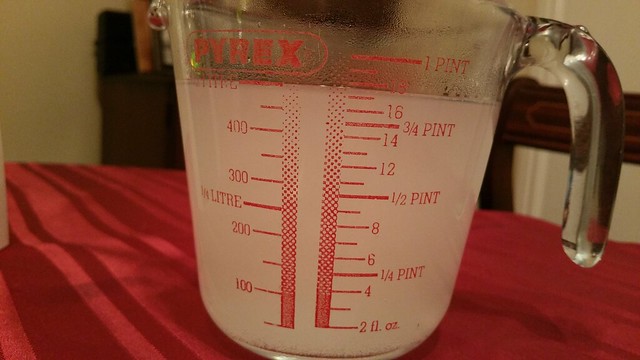 Then filled right up to the 500ml mark with water

Since I wanted to dissolve the solid chemical into the water I used water from the kettle, but not absolutely boiling, just very warm. I then poured the solution into the cleaner and repeated for the Bicarbonate of Soda. 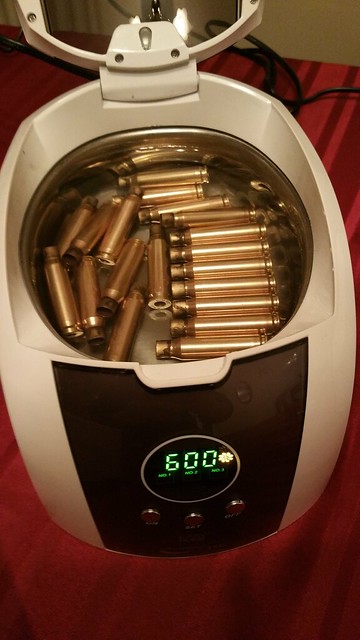 I had read lots of reports of people trialling cleaners and solutions for lots of different periods and getting lots of different results. Since I don’t have infinite amount of time to put into workng all this out, following some graphs and tables I decided to put the device on the longest setting (which also runs at full-wave as opposed to half wave) which was 10 minutes.

Within literally 10 seconds the dirt was lifting and contaminating the solution.. This is the only photo I took of the devices in full swing, mainly because I would have just been taking pictures of black water. 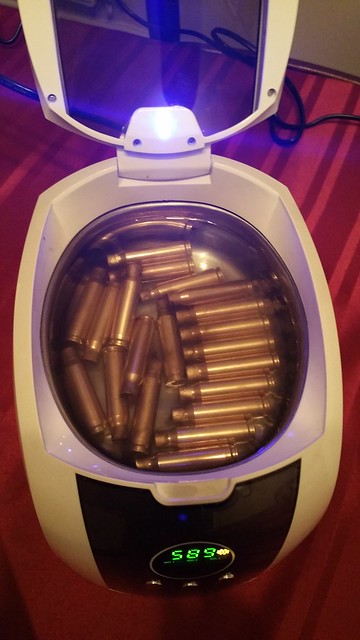 Ultrasonic Cleaner On With Brass Cases

After the 10 minute cycle in the acid bath, they were lifted straight out into the Base bath for a further 5 minute half-wave cycle.

Next came how to dry them so I wasn’t left with water marks. Since I don’t own a hairdryer and wanted ease of use I decided to get a wire rack tray and a baking tray out and use the oven. slightly over 100*c (since that should evaporate the water efficiently and any more would be a waste of energy) I put the first batch directly onto the baking tray and into the oven. 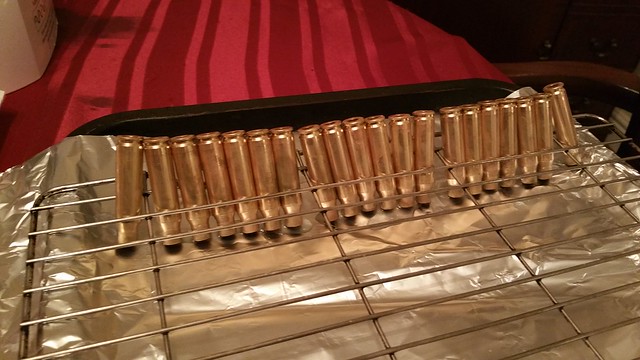 My major mistake at this point was not rinsing off the baking soda, these cases came out of the oven with a white film all over them and white film all in the primer pockets. So I decided to add a step which was a final rinse with tap water to remove any solution that may be on the cases then onto the baking tray. Total time in the oven was in the region of 5-7 minutes, purely until the end of the next cycle of the soda cleaner and then out with the old in with the new. 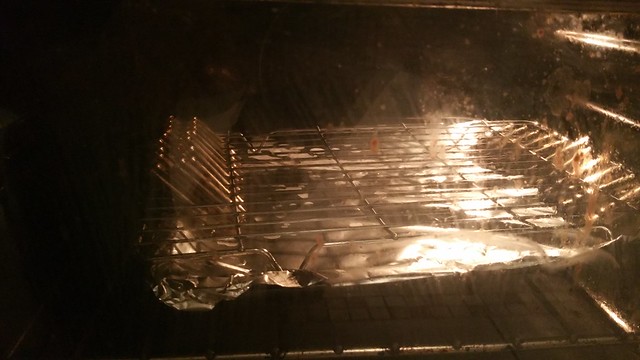 Brass Cases Drying in the oven

I also did my .223 cases which fit a few more in both the ultrasonic cleaner and in the drying rack at a time. 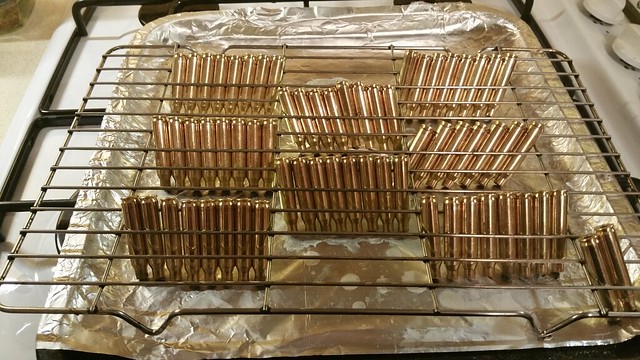 So the majority of these cases have not had a hard life, and they were not particularly badly soiled. but the key was to get primer pockets clean, especially clean enough to reuse without having to give it elbow grease. See for yourself how they turned out: 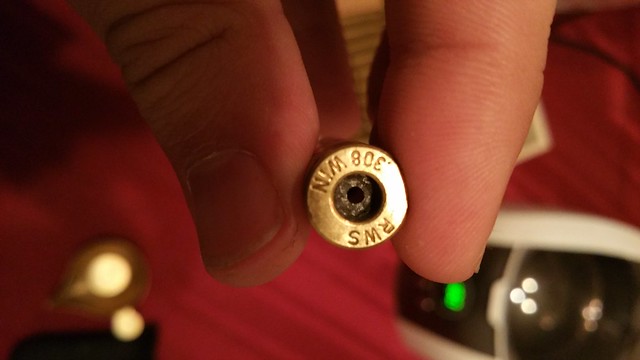 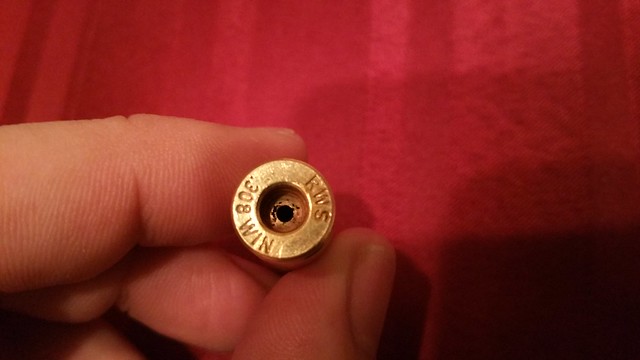 In total I managed to get 330 .308 cases cleaned and dry and also roughly 180 .223 cases cleaned and dry in one night – 3.5 hours or so. It was somewhat of a learning curve and fun to try out new equipment, I’m sure I could manage keeping on top of the procedure so I only have to do them in smaller batches in the future, but the 25g/500ml solution of citric acid worked from the first to the last case and I would definitely consider a smaller percentage for a smaller batch of cleaning in the future. 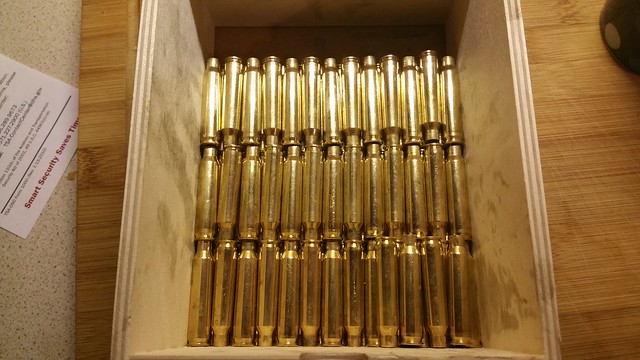 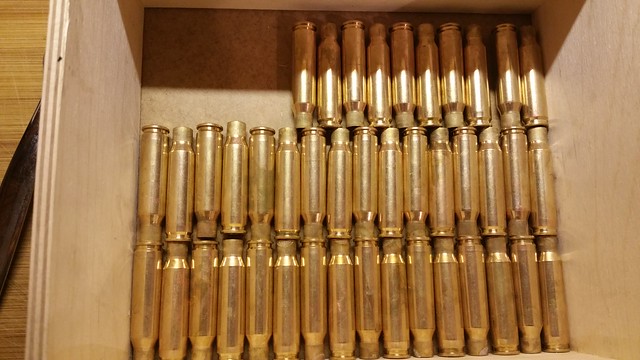