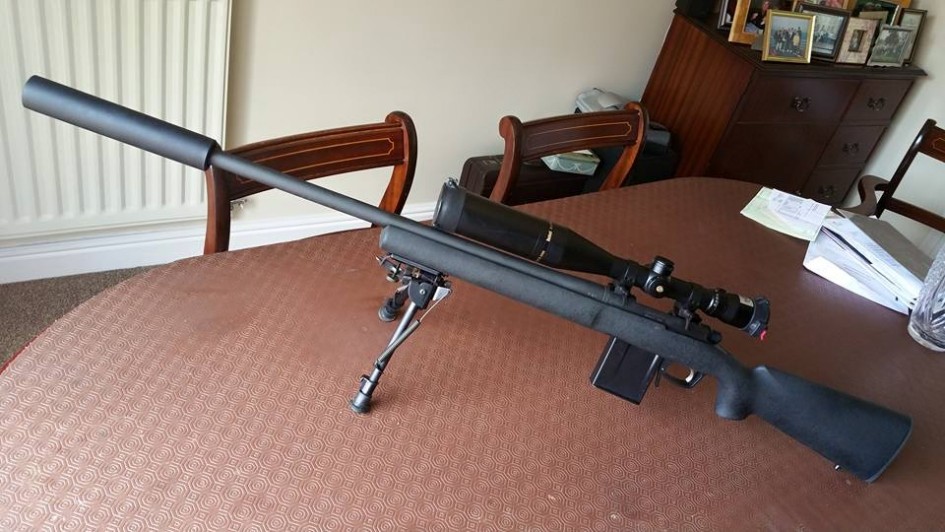 I recently had my Remington 700 in .223 threaded for a moderator by Norman Clark Gunsmiths along with a list of other amendments, such as having the barrel taken back to minimum head spacing, bolt lugs lapped, feed ramp polished, tactical bolt knob fitted and the biggest of ll, my Police Stock inletted for detachable magazine to be fitted.

Suffice to say the whole experience left me broke, and since the works been done I haven’t been able to get it to the range to fire it, or batch test a new recipe of home loads for it since Hodgdon Varget seems to have disappeared in these here British Isles. 🙁

So, what I did have was a handful of RG L18A1 blanks and a brand new Tier One Spartan 3 Moderator and it seems, a decibel meter.

So I went to the range, the only place I realistically presumed that I could get away with firing blanks in a rifle without anyone getting worried and calling the police…

So the basic set-up: Rifle prone on bi-pod with Decibel meter pointing at the muzzle from roughly 26″ away on the right hand side as can be seen in the videos.

I had 24 blanks as shown above, 3 from one batch and 21 from another. so each magazine was filled with one from the batch of 3 and 7 from the other batch. With the last round in the magazine the odd one out.

Since I am only (for the interests of this test) interested in the Peak db(A) reading of the firing, and from what I’ve read the supersonic crack of a projectile would be louder than that of the suppressed rifle, then moderating the sound from position of firing needs to suppress the bang, rather than the crack, which comes from the expansion of the gases which we are trying to slow in this instance by using a moderator.

By removing the “crack”we see a true representative of the effectiveness of the moderator without the results being skewed by the supersonic projectile noise. Since sound does not amplify when hitting walls of a range (a .22lr range, that I couldn’t use live .223 ammo if I wanted to on it, I was at for shooting a postal bench rest .22lr competition anyway) then indoors or outdoors makes no difference to the test.

The following testing was done on a closed range. Both people in the video had ear and eye protection. Since we were using blanks there were no lead projectiles coming out of the barrel, however testing was done on a range as a safety precaution in-case any of the blank round cases failed and the rifle subsequently sent a bit of brass case down range. The target area which was being used to aim at was checked thoroughly at the end of testing and at 25 yards there was absolutely no indication of any debris making it to the target area.

Sans Moderator with the tactical muzzle break adaptor that comes with the Tier One Spartan 3.

Since this was incredibly loud and we were at an indoor range which usually only sees .22lr I decided that since the spread of the first 4 readings were so close I would not need to fire more unmoderated for my results.

That’s our baseline for the test. Unmoderated 123 db(A) Readings under this baseline will be considered the level of moderation.

We can see that in Reflex configuration this moderator baffles by roughly 14.5 db(A)

Since volume is exponential (every 3 db the energy doubles) this means that with the moderator in this configuration it is almost 5 16* times cheap ambien from india quieter (in terms of acoustic energy) than without a moderator at all.

9.4 db down on the reflex configuration which was considerably more than I was expecting considering that by moving the moderator to the end of the barrel doesn’t add any more baffles to the mod, however the extra expansion chamber seems to do quite a lot. Half the perceived volume again on the reflex moderator. 3x less acoustic energy.

If quiet is the aim of the game then end of the barrel is the ultimate configuration on this moderator. Reflex makes a heck of a difference though.

It’s worth noting that since I was using blanks there is no supersonic “crack” from the bullet which would effect the readout, so for the purposes of this test, it might be worth imagining that this test might be suitable for working out how well the mod would work for subsonic rounds. Either way I think it shows that the moderator in it’s most efficient format dissipated roughly 8 247.5* times the acoustic energy than without the moderator at all.

What I did find curious was how the first “cold bore” shot after putting on the moderator each time was almost 10db or so louder than the consequent shots. Is this common for moderators? What causes it? Does there need to be warm gas in the moderator for it to work effectively? Comment with your thoughts…. (Edit: 22/07/2015 I believe this is termed as “First Round pop” and I wrote a follow up blog on this phenomenon here.)

99.8 db with the moderator is still extremely loud, but for occasional firing (hunting for example) would be suitable for use without ear defenders however for sustained periods of fire such as on the firing line of a competition, the only real kind of shooting I’ll personally be doing, I will still be using ear defenders, but it’s nice to know they don’t have to do so much work to keep my hearing safe for many more years of shooting!

It’ll be interesting to try the same tests with live ammunition next time I can get to the range.

Edit: See my first round of results from testing this with live rounds here.

*There is roughly 23.2 db(A) difference between unmoderated and moderated. Since volume is a logarithmic scale for every 3db(a) increase the volume doubles. If we start at 99.8db and double the energy (twice as much), we will have 102.8db. If we then double the energy again (+3db) we will have 105.8db which is twice as much again from the initial figure, which means 4x as much energy in 6db. Another 3db sees us at 108.8db which is 8x as much energy. If we do this until we reach 123db (unmoderated) :

Please note that I am by no means a mathematician and I my grasp of logarithmic scales is limited, but I believe this calculation to be true. I welcome anyone to correct me if I am wrong. (23/07/2015)

My experience with ordering direct from Tier One was very good. Fantastic customer service, and Darren (if I recall correctly) kept in touch with me throughout the build of the moderator, and with shipping updates letting me know when it had gone to my RFD and how long til it expects delivery. 10/10 for service and 10/10 for a quality product.