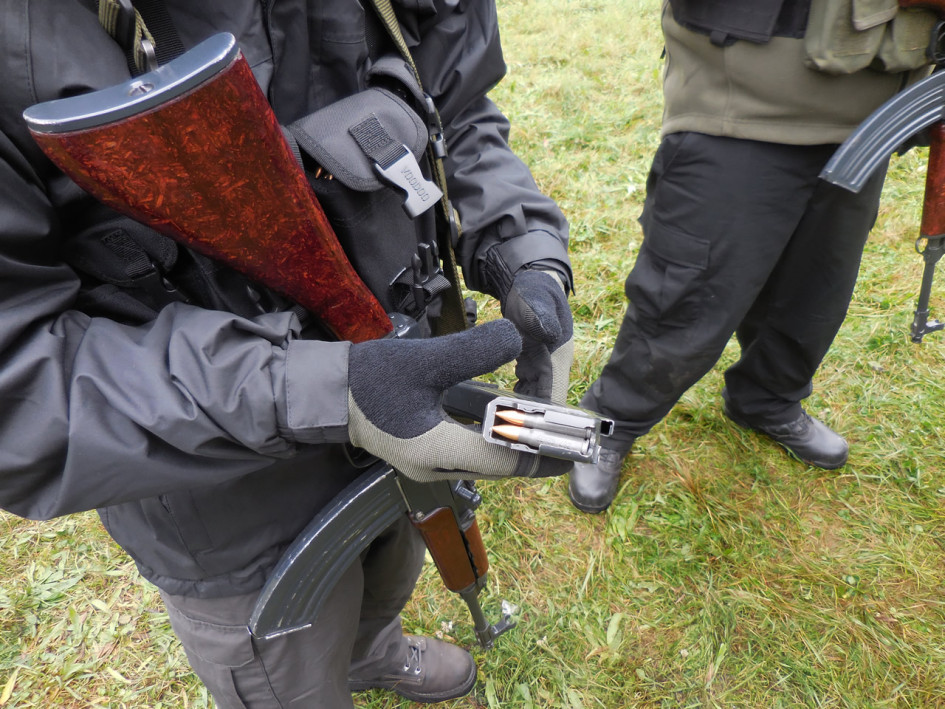 Togged up with VZ58

As I write this it is approximately 9 months after this Assault Rifle Training weekend, as such some of the details may be hazy and incorrect, but I’ll try and document what we did as best as I can.

Arranged by Yves, a member of Full-Bore.co.uk, myself and a few guys went over to Czech Republic, around 50km out of Prague (M?lník) to go and learn basics of assault rifle handling and tactics. A few other members of the forum joined us, Dave and Ray. I also brought with me my friend Dave T who has an interest in shooting too.

So me and Dave T take the longest route to get to Vaclav Havel from Birmingham Airport, but are the first to arrive. The route we took was: Birmingham International to Brussels then Brussels to Prague.

We got to the airport, both our first times in the Eastern Bloc, both with images of the movie “Severance” running through our heads, thinking just how long it will be before they drop us in the woods and tell us to run…!

We didn’t see any of the people awaiting in the arrivals area holding anything with our names on  weand really didn’t know what to expect, so we did the only thing we could and headed to the supermarket to buy cigarettes and drinks.

When we got back to the arrivals lounge we were approached by a burly French/Czech fellow by the name of Luboš asking us if we’re here for the shooting course. Relief, we haven’t been forgotten!

We headed to the hotel and awaited the arrival of the rest of the group, in the hotel bar/restaurant. Just as myself and Dave were about to crash for the night, I got a phone call off Yves saying they were arriving and would be with us in 20 mins. So we stayed in the bar and waited.

Everyone arrived an got acquainted around the table of beer (40Kc a half litre… around £1.10..!) and we went to bed to see what awaited for us.

The only thing that will get me out of bed early (6:30) in the morning is the promise of shooting, and it did. We showered, had breakfast and got mini bussed the < 10 min drive to the range.

Range Entrance – As seen in my other range report.

Targets on the Range

We were given chest rigs and dump pouches to attach to our bodies, and then given 6 mags and told to fill them.

Then it was off to grab a rifle and a sling, and attach the sling to the rifle… So we were left looking like this,

We then went down the range and ran through procedures, how to hold the rifle, and various positions, and how to safely (on the range) keep the barrel always towards targets whilst transitioning from back to front, as-well as loading and unloading the rifle. We also went through checking a round was chambered and a few other drills, such as how to pass the rifle to someone else and also what to do if handing over a loaded weapon.

We then went through some prone transitions from standing to prone and putting a few shots on target, then kneeling, and finally standing.

I think by this time it was getting toward lunchtime so we took a break and headed buy ativan lorazepam back to the hotel for a bite.

My memory is a little fuzzy as to what was done on Saturday Afternoon and Sunday Sunday morning (Drinks were CHEAP!)

I do remember shooting the Glock 17 of one of the instructors as I’d asked Yves if it was possible just to have a mag when arranging the shoot, as we don’t get to shoot any pistols in the UK. He went out of his way to make this happen for myself, Dave T, and Dave got a shoot too.

As most of the shooting took place one after another on the firing point with no gaps, I didn’t get many photos throughout the first day except in breaks, but during this pistol shooting, I did manage this video.

2 groups, I adjusted after seeing where the group was going whilst aiming for centre mass… Head shots keep the Zombies down… 😀

So at some point we had to (reluctantly) put the rifles down (whether it was to eat, or to sleep) and it always left a cheeky grin when we did so, as there was literally a pile of VZ’s on the table…

We did some rapid 5 successive shots onto targets…

There’s more than 5 shots on the centre target. getting my monies worth..

There was also a lot of standing around, casually hanging around with loaded firearms on our backs… (RCO’s at Bisley would have a heart attack… I should know, I am one! haha!)

We did stoppages, double feeds, clearing and a LOT of reloading practice and drills fully instilling the correct way to change a mag on weapons like these. – The course is universal, so that the techniques and training can be used on most, if not all weapons should you pick up something else that is not exactly the same, the clearing techniques an methods used should be compatible. – some guys were using AK’s and I spotted an M4, as well as some interesting weapons that the Czech guy who was relegated to the group of Brits also brought along… (Beretta AR70/90 and a Sig 551 I think it was…).

The techniques were drilled and taught excellently. a few of us had dud rounds and misfires throughout the day, and like clockwork the training kicked in and worked perfectly. I was surprised, and delighted by my new found skills….

Such a great weekend, couldn’t wait to get back, so I did; FAST Czech Republic NTTC/NTBS Course Pistols and Assault Rifles