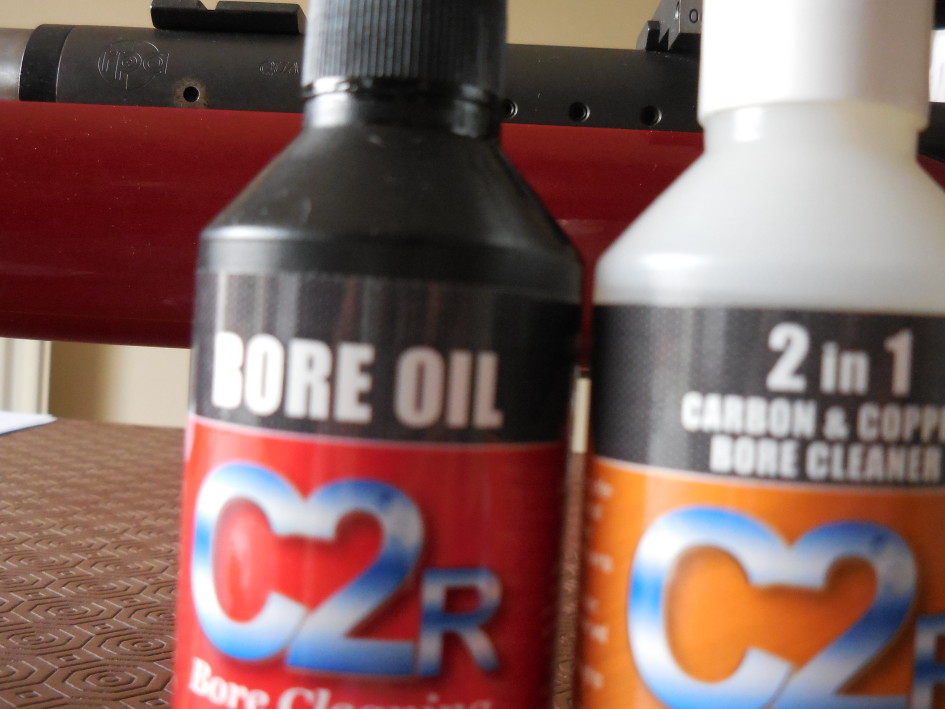 As we saw in my eBay Borescope Review, My Krieger Barrel on my RPA Ranger Target Rifle was not in the best of shape, even though after every range outing I had cleaned it “thoroughly” with Forrest Bore Foam, Nylon brushes and Pro Shot Patches. I also oiled the barrel after use as it’s normally a couple of months between visits to the range, much to my dismay.

Seemingly the work I did was not good enough as this was the state of my barrel and action prior to writing this blog.

Not the smoothest of videos showing the action, but I think you get the idea.

There is obvious carbon build-up left in the grooves and also some patches of copper fouling left on the lands.

So time to begin. I recently got hold of a new rod guide for my RPA action as the one I got from Fultons, although it fits the rifle well does not allow for Pro-Shot patches on a Pro-Shot Jag to be passed through it’s bore, which means removing the guide, threading the rod, applying the patch, inserting the rod and guide and then pushing through. Not ideal and probably more trouble than it’s worth trying to line everything up to push it through. Anyway this shiny Rod guide fitted perfectly and without any drama. Pro shot loaded jags went through perfectly. I got it from the Shooting Shed.

Once the guide was fitted, it was straight to putting some patches through the barrel.

Firstly 3x C2R Loaded patches. (It’s worth noting these patches are actual Pro-Shot patches provided by Norman Clarke Reloading, Rugby. They absorb solvents and liquids instantly and are much preferable to use than the cheaper ones I have for my .223 – Note to self, buy more Pro-Shot Patches).

As we can see, the rust on the patch from the inside of the barrel is shameful. With a slight green tinge, perhaps there was some copper left in it.

The video shows that it looked much better after the single first patch, however there were still spots of rust and possible carbon build up on the lands.

Patch #2 wasn’t much better on the rust front, or carbon, his had a light blue tinge.

After these 2 inspections I decided to give the barrel a soak in C2R for a little while and give it a good clean.

Push a patched jag almost to the end of the barrel:

Patched Jag at end of barrel

Fill the “well” with C2R

And Slowly pull back the rod to the rod guide. I used a back and forth motion (2 steps forwards, one step ativan to buy online back) until I felt the rod get to the guide.

I left the rod in this position for what must have been 30 minutes. Just long enough for me to strip the bolt and clean and oil it.

Once the bolt was cleaned, I pushed the rod back through and out to the muzzle and with it the slight pool of C2R that had been coating the barrel.

I then pushed a dry patch down the barrel.

You may just be able to make out some blue streaks on the patch, presumably this was copper.

I then set to using water-wet patches and clearing what I could out of the barrel.

The first patch was the dry C2R, the next 5 (top left to right and middle left to right) showed that Forrest, Nylon Brush Scrubbing and patches did not clear out all of the copper.

I continued putting wet and dry patches down the barrel until they came out clean.

This was the result.

Much better, and a much clearer bore.

The barrel was then oiled liberally as I do not have any shoots planned with it until December, and then I set to work cleaning the action which, through my neglect and ignorance of cleaning routines had got quite rusty after not completely drying the action after being out in more than a couple of thunder-storms over the last 4 years (Ah yes, the joys of shooting in Britain!).

I have 2 tools which I used to try and clean the action.

After much scrubbing with both and using patches, the result was much better than it was, but still not great. If anyone has tips or tools which make it easier to get in the action and really scrub the crap out of there, I’m more than welcome to hear advice.

Hope this helps someone out there.

Any questions, hit me up in the comments.