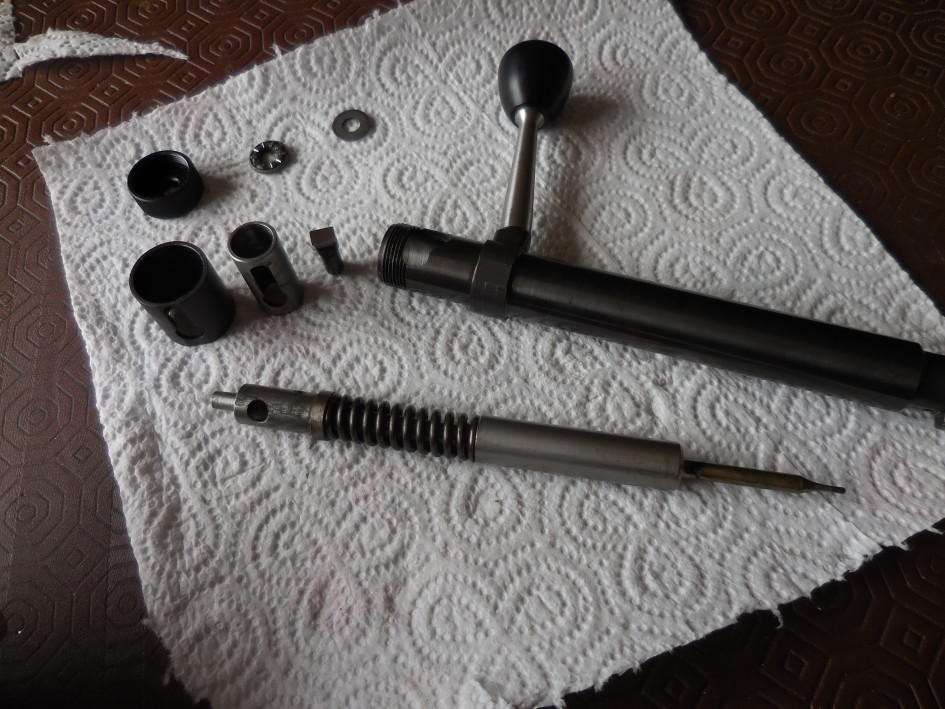 Whilst cleaning my RPA ranger (RPA Quadlite Actioned Target Rifle) I decided to take the bolt apart for the first time. I’d not done this before on this rifle, and decided to look on the web for a manual or walk through to make sure that I didn’t break anything whilst dismantling, or come across anything which may stop me putting it back together. My search however was fruitless, so hopefully with my blog you’ll have found what you’re looking for if you’re in the same position.

We can see that the bolt starts in the cocked position. Unless you have a de-cocking tool / bolt holder, this will be how you will see your bolt out of the rifle.

First things first we’re going to want to unscrew the end piece of the bolt.

This is not too difficult and is not torqued hard enough that you need any tools for this.

Then I had a washer fall out, there is a washer and bearing in this bolt. They look like this.

This is also the orientation and order that they are assembled.

These were then cleaned and set to one side whilst I tackled the most intricate part of stripping the bolt.

We can see that there is a groove and a circle, we push the cocking mechanism to the top, ensuring that the outer sleeve stays put.

Amendment; Thanks to Richard Utting of SharpshootingUK: It’s worth marking the cocking mechanism at this point so we know which way is forward. This was not as pertinent on my rifle, probably due to the few number of shots, but following reading this article and stripping Richards RPA bolt, he noticed that the wear on this cocking mechanism had always buy ativan xanax valium been on one side, which polished the part and made it much smoother to operate when replaced the same way round as it was when it was removed.
Thanks for the heads up Richard.

Then we twist the cocking mechanism through 90 degrees.

And simply pull it out.

We can then remove the firing pin and the rest of the pieces. Which will look like this:

At which point everything is cleaned and polished as the firing pin was a little dirty. All old oil was removed using kitchen roll (paper towel) and lightly oiled.

Reassembly as you can imagine is as simple as reversing this procedure and keeping the parts lined up and oriented the same was in which they were disassembled.

The hardest part of reassembly is re-cocking the bolt.

A trick I learned from a mishap at Bisley and some tutorials on youtube for Remington 700 bolts is to use a loop of para cord (or shoelace) and stand on it whilst looping it around the cocking mechanism on the bolt, then pulling in the direction needed to cock the bolt. It looks like this.

You will need to pull very hard, aaaand Voila. One cleaned and re-assembled bolt.

Any questions, just leave a comment and I’ll get back to you as soon as possible.