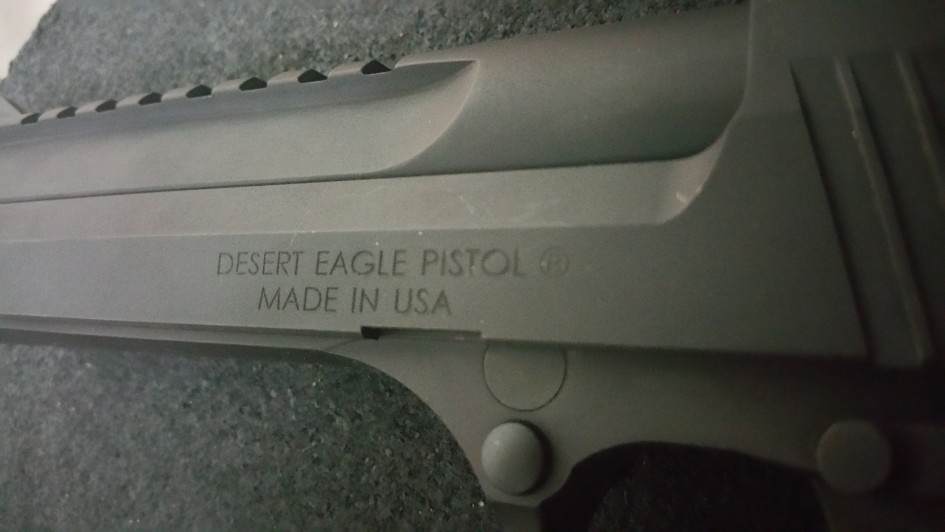 And then again in Call of Duty 4 on the Xbox 360, I had a strong yearning to get behind one of these “mythical” hand cannons.

I’ve made a few trips to the states, particularly firing ranges whilst I’ve been out there, but I’ve never actually seen this pistol on the rack, or known of it’s existence in firing ranges, particularly for rental, so when one of my shooting buddies pointed out that Wilshire Gun had one on their rental rack, I had to give it a go.

I talked SWMBO into coming to the range and got her shooting her first ever pistol and managed to get 20 rounds of 300gr Hornady XTP Hollow Points on the big boy.

Unfortunately, something I’ve found with quite a few rentals is that the mechanism was a little dirty, and although it was chambering the rounds after firing, the slide was getting stuck open about 1mm stopping the pistol from firing on follow up rounds.

As you can probably tell from the video, by the 2 octave pitch shift in my voice, I was a little excited nonetheless. The thing does in fact kick like a mule.

The sights are not great, there’s a massively wide rear sight and the front sight seemed a little lost in between them, which made it difficult to a somewhat novice like myself to shoot it with pin point accuracy. However, at 10 yards, all shots were easily middle of the mass as can be seen at the end of the video.

This was my very first shots with the pistol and I’m not sure if you can hear the “f*** me” when i fired the first shot. I’m not sure what I was expecting, but whatever it was, the Desert Eagle .50AE certainly delivered!

I pushed the target out a little further once I knew I could hit the target at 10 yards, maxing out at 20 yards to make the target (which I kept) look a bit nicer than having vastly wild shots on it… haha.

I’m not sure I’d choose this hand-cannon for self defence if we had the ability in this country. There can be no denying the stopping power this thing can deliver, however it’s certainly not something that could be concealed easily, and the recoil recovery time would be huge. I didn’t manage to double tap it due to the sticking mechanism, although I’m not sure fast would be a word I’d use to describe it, devastating, but not fast.

Shooting the Desert Eagle .50AE was a blast, pun intended. If I get change again, I’ll be there. If you get chance to shoot one, do it. It smarts a little, but my god is it satisfying.

About The Desert Eagle .50AE

From a long line of movies, TV and game lineage, this pistol is the one to beat.

Whether it’s Vic Mackey’s personal carry (The Shield ~ .357 version), or Clarence Boddicker with his bad ass suppressor (Robocop ~ .357 version), River Tam with Jayne’s D’eagle (Firefly ~ .44 version) or Lara Croft with one in each Hand (Tomb Raider ~ .50AE). This pistol has been used to great cinematic effect throughout it’s history and I can finally say I got to fire one and it was EPIC.