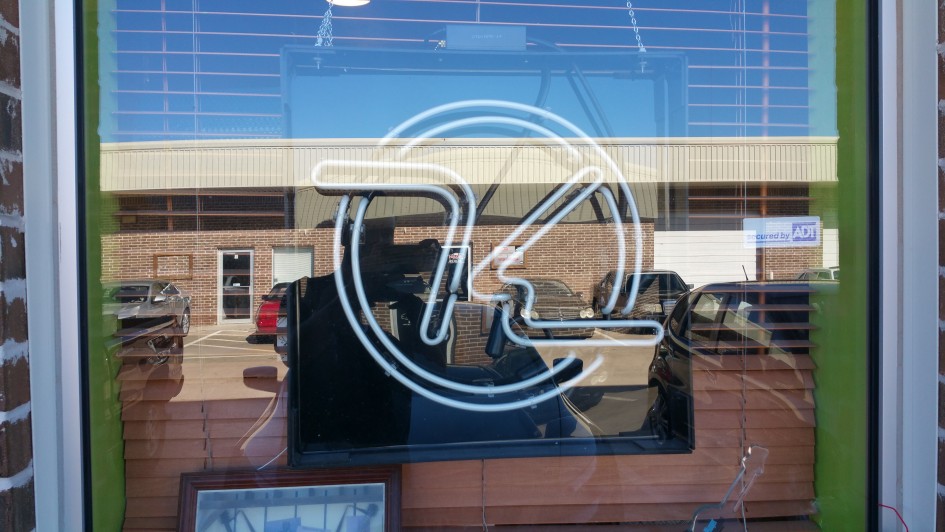 Last month my girlfriend and I embarked on a journey across the United States of America. We both have the ambition of visiting all 50 of the United States. This was our first journey to the country together.

Whilst planning where to go on our trip to the states, we decided that we wanted to go from Chicago to somewhere. Since I had a friend in Arkansas and had noticed that Robert Keeley, whom at this point I had shared a few messages back and forth with on Facebook, was in the neighbouring state, Oklahoma we decided to head there. So I shot a message off to Robert and mentioned that we’d like to come visit the shop on our travels.

What became instantly clear was that Robert is a very friendly and welcoming guy who seems to love having visitors and guests come to the shop as RK showed real enthusiasm to meet both of us and show us around the shop, where the magic happens.

At this point I knew 2 things, I really wanted to go to Oklahoma, and I didn’t really mind where else we decided to go.

Since we went on to plan hitting 7 states and were on a strict time-scale to get back to Cali for Thanksgiving, we decided to fly in to Oklahoma and start our road trip to Chicago from there, rather than spend a couple of extra days driving through desert and seeing not much of anything interesting in states we’d already both been to (California, Nevada and Arizona).

We got in to Oklahoma on the Monday and had arranged to meet up with Robert on the Tuesday. Robert went out of his way to give us advice on where to go and do whilst in Oklahoma before we met and put us in touch with Atlee, one of the team at Keeley Electronics who offered us great advice on where to go eat and what to go do. (we ended up going to Garage Burgers & Beer in midtown which was the best burger of the trip, hands down, and then we went bowling at this cool retro bowling alley called Dust Bowl where they were kicking out classic album tunes from most notably Led Zeppelin but also other bands of the era, my kind of music).

The next morning we met Robert and Craighton Hale at this neat little breakfast diner in Edmond called Around the Corner (totally a place me and Cate would have overlooked, but a great atmosphere and an awesome All-American Diner to kick off our road trip) where we proceeded to chat about the differences in cultures between the UK and US along with the National Health Service, Obamacare, the past, the present and what the future brings…

Our delicious breakfasts were soon devoured and we jumped in the car to follow RK to the shop…!

In a rather unassuming part of town, we pulled on to a parking lot of some offices/workshops which was filled with cars, but notably no signs on any frontages except for the neon sign of the Keeley Logo. Robert went on to explain that the business had expanded so much in the last few years that in order to cope with the number of parking spots they needed for the staff, he had to take on extra buildings in the block to accommodate. He also mentioned that when they get chance, due to the heavy demand for Keeley pedals, they’ll move certain parts of the building process into the other buildings and expand. Which all sounded great!

So we enter the unassuming building and instantly you can tell this is a place where work gets done, and that work involves music, pedals and amplifiers. There’s old and new gear scattered everywhere in the organised chaos which reminded me of my place back at home, I knew this was my kinda place.

We go into the office immediately on the right as you come in and there’s a familiar (to anyone who follows Keeley Electronics on Facebook) red couch by the door, and a Vintage Marshall Stack sitting next to it. This is where we park ourselves whilst we chat some more.

Robert, having just got in to work a couple of hours late due to having breakfast and meeting with us, has a few things to attend to so goes about his business whilst leaving us in the very capable hands of Craighton Hale.

Craighton told us what it was like to work with Robert, and what it was he did in the business, which is design and develop new boards with Robert and lay out the PCB designs, pretty important stuff. I got the feeling that Craighton was Roberts Right-hand-man and I’m sure we’ll be hearing a lot more from him, along with that which you probably didn’t realise you were already hearing from him!

Craighton then proceeds to pull out a Gibson SG and let me play with some of the newest Keeley pedals that were lying around and experiment with. A thoroughly terrifying thought, for some reason playing my songs on stage doesn’t phase me any more, but playing in front of people who know how to play guitar in a small room fills me with dread that they’ll be able to tell I bluff my way through playing guitar..!

Ste Gough with Robert Keeley’s SG on the Red Couch

I was playing with the Oxblood and the brand new Multi-Echo ME-8. Both of which sounded freaking awesome through the fender amp that you can see in this photo.

After a little while of noodling some licks on the SG, Robert came back into the office and began showing me how the Seafoam+, another brand new pedal to the Keeley Range, worked and what it could do. Suffice to say, it’s now on my Christmas list! It’s a must have!

After a little while of chatting and playing; work caught back up with Robert when one of his team by the name of Aaron Tacket popped his head around the door with a new pedal idea he’d been working on which he then talked Robert, Cate and I through buy valium goa whilst RK played through it. Some really interesting sounds came out of this box… I can’t say I’d use them all, however it was a work in progress and Robert told us how they often work on crazy sounds which can inspire them to go on and make something great.

One of the neat features of what Aaron was showing us was a Vintage Vinyl “Crackle” and variable speed style thing which sounded really, really cool. About a week ago a new pedal was announced with a feature most likely based on this; The Gold Star.

Aaron showed us some other DSP algorithms on the same pedal in different modes and we heard the “Elephant playing the Tuba” effect (Well that’s what it reminded us of..) before explaining that you can often get some weird sounds by moving the walls of the digital echo chamber, which can also lead to other great effects, but I’ll leave it to your imagination what those might be, or become…

After a quick lesson in how to get the best out of a compressor algorithm, Robert took Cate and I on a tour of the factory and to meet the members of the team who crank out the pedals. I would love to say I can remember everyone’s name and what they do, but I really can’t, so I’ll leave it up to Robert to do it for me with one of his Youtube video tours.

One of the key notes that I found didn’t quite come across as well in the video as it did when I visited the shop was just how much like a big family the team are. A couple of husband and wife teams and a real homely vibe amongst the guys who work there. Everyone really seemed to want to do the best job possible and push themselves as hard as they could to do as many pedals as possible. What this ultimately means is that at the time of my visit Keeley Electronics were on target to be hitting 600 pedals per week, and as fast as the pedals hit the shelves of the stock room, they’re pretty much out the door.

What this says to me is that Keeley is a massively in demand brand and on the up and up! With so many great pedals coming out, it would be massively hard to ignore the success that the whole of Roberts team, Robert included have worked to achieve and it is absolutely awesome to see that work paying off for them.

The place and the people seem relatively unchanged by success, one of the nicest things about the entire workshop was the homliness of the place, and the down to earth attitude, personified in something both I and Cate noticed walking through the building, on one of the whiteboards a column headed “shit we need”. No pretenses, no bullshit, just getting down to the brass tacks of tone and pedal building.

Plans for the Future

On the tour we got to see the CNC cutting machines in action, along with the awesome couple of pedal printers in action. Robert told me that the pedals get powder coated/painted externally at the moment by a local shop, but he does have plans to use the buildings we talked about earlier, to expand and bring the painting process in-house, this could potentially help to increase the output of pedals even further.

I got to hear some plans for the future which seemed like they were under wraps, which sound awesome and a keen eye should definitely be kept on the Product Lineup at the Keeley Electronics website.

After an epic tour of the building and meeting a whole load of new friends we came to the stock room where Robert hand selected a bunch of effects pedals after learning about the music that I play and what equipment I currently play through and rather generously handed them over to me as a parting gift. This of course was highly unnecessary (which I told Robert) but he insisted that I must take them with me.

This was of course an overwhelming gesture, one which left me flabbergasted for almost a week and that I don’t think I have still come to terms with. My visit to meet hang out and talk with RK genuinely made my entire trip to the states.

Robert Keeley is an absolutely phenomenal person and all round gentleman.

If you play guitar and are after something special to make your tone sound amazing, look up Keeley Electronics, If they don’t make something to make you sound like the tone you have in your head, it probably doesn’t exist. If that’s the case, get in touch with them and they’ll probably make it for you.

A thoroughly amazing visit with genuine people, Robert, Thanks for having us.

I was in such awe the entire time I was there, I completely forgot to get a photo of myself with Robert and Team members, Cate did manage to get the photo above of me on the Red couch, and also this one of me with a pile of pedals.

Check Back for More…

After playing with these Keeley pedals, I’d like to try and do some reviews of them in the coming months on my blog. Since I’ve never reviewed any guitar effects, it might take some time to get used to writing about them (with videos) but it’s something I’d like to do, so check back periodically to see how I get on with that venture.