Shooting Abroad: First Time Shooting Pistols In The US 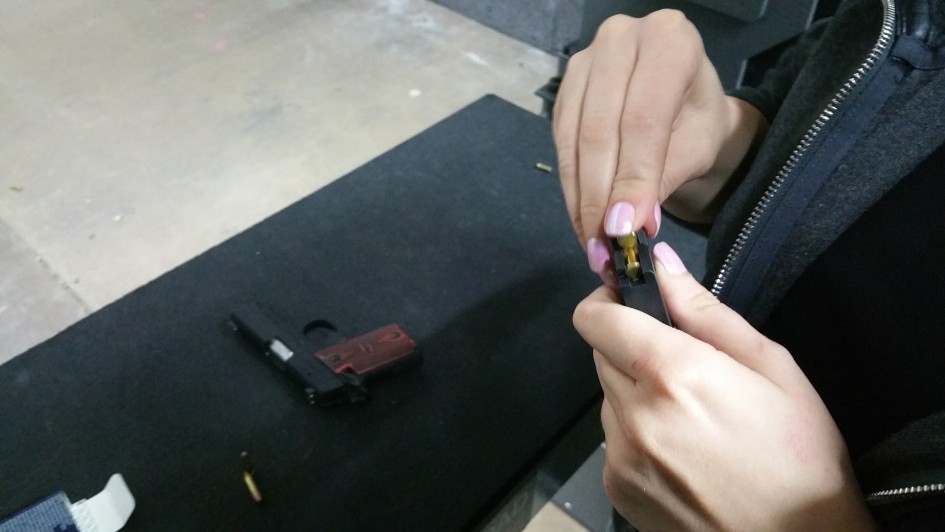 Me and my partner (Caty) have just got back from a trip to the USA. As I’m always on the look out to shoot things that cannot be owned in the UK, and our tour of the states started in the rather liberal gun law state Oklahoma, I dragged Caty along to Wilshire Gun where I proceeded to take her onto the range and shoot some handguns, her first time.

I decided, on Caty’s behalf to start her off with something small, something in .22lr. It is cheap to feed, there’s barely any recoil and it’s a little less intimidating. In little more than 10 minutes at the range, we were on the range and ready to “have a go”.

This was a fantastic pistol for learning how a pistol functions, the fact that it looks like a mini 1911 has nothing to do with it… 😀

After doing a dry run with an empty pistol to get used to the way the pistol feels and aims I showed Cate how to load the magazine and walked her through taking off the safety and chambering a round and then let her have a go with 5 rounds which she loaded herself.

Aiming centre mass at 10 yards and she hit the target with all rounds.

This is where the range officer (watching from a camera) came in and offered some valuable advice about how to hold the pistol, which admittedly I hadn’t picked up.

A little dry practice holding the pistol correctly and off she went again.

More centre mass hits, although a little to the left, pretty much all shots on target. Not bad, not bad at all! 😀

And one more time, since it’s a zombie, time for head shots…

I think she enjoyed it! Just look at that grin!

Whilst the Glock would have been the obvious choice in 9mm, it’s a little bit boring to say you shot it as your first handgun (at least in my humble opinion), I had asked if they had a Beretta 92fs – which I’ve personally never shot, but let’s face it, it looks cool. Wilshire didn’t have one but suggested the 1911, which I jumped at as I am an absolute sucker for 1911 pistols, and assumed they’d only have one in .45 which would have been quite the jump from .22lr.

Anyway, we ran through the functions of this pistol dry, noting that this one had a totally different style of safety. Then we got down to it!

There’s not a lot to say really, Cate took to shooting handguns like a duck to water, she loved it. This bodes well to me dragging her repeatedly to the gun range on any further trips in the future. Happy Days!

I wrote a blog on my first time shooting a Desert Eagle .50 recently, check it out. Cate decided against having a go with the .50AE after seeing the kick it gave to me. It was a lot of fun, but I advised her the same too. Going from a .22lr to a .50AE in the same day seems like a bit of a stretch!

Unfortunately the Scar 16 had a FTE (Failure To Eject) after every round we tried to fire from it… so much for Semi-Auto. So we went out and swapped it out for a Colt M4 with an Eotech and Magnifier on it which gave a much better sight picture for Cate’s first time shooting it, and also for me as I’ll take any advantage to get better scores!

Cate has a healthy respect for guns, and she’s still a little bit light handed with them, which is fine, but sometimes, especially with rentals, you need to be a little forceful. Great shooting, a little practice with handling may be required though… 🙂

Again! This time, lets make it interesting. 10 shots on the bottom left diagram, and I’ll do the same and we’ll add them up at the end. Loser pays for lunch…

Unfortunately a the mag wasn’t slammed all the way home, but it was a simple fix to get the first round chambered and away she went.

Then came my go. Impatient Ste trying to show off… Results of the competition at the end of this video…

All in all, a fantastic experience and hopefully I’ll be able to get Cate to the range a bit more in the future and she can get some more use out of those bright pink ear defenders! Hopefully I wasn’t too bad a teacher! 🙂