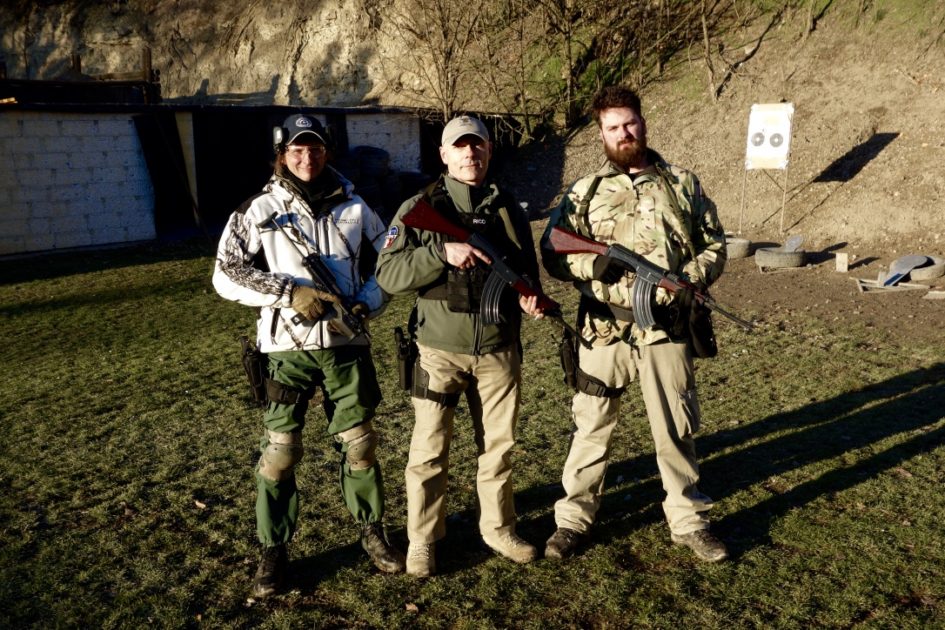 David, Yves and I

Last week I went back to Czech Republic with the ‘usual suspects’, FAST Czech Republic consisting of Christian Goblas (Main instructor), Luboš Kulhavý (Instructor), brought together by Froggy (Yves) from full-bore.co.uk. This time hoping to add the third gun to our repertoire and have full Tactical Shotgun, Rifle and Pistol Training under our belts.

Since the course was organised with 3 levels of experience/qualification we visited Straškov-Vodochody as opposed to M?lník. The aim of the trip was to improve my understanding of firearm manipulations and shooting disciplines which are not allowed in the UK, due to knee-jerk legislation.

I left Birmingham on Thursday via Frankfurt for evening arrival ready for our course to begin on the Friday. Luboš had laid out a refresher course for us on Friday morning.

Yves trying out the Cheek Weld on the Skorpion

Since there was only 3 of us on the Friday Morning we had some serious range time. The morning was the above itinerary and Luboš was very thorough in reinforcing the techniques we had picked up on the past trips with the pistol.

As we were on a different range from previous trips there were a few new features, such as falling/swinging plates. Once we’d gone through the Itinerary we had free reign of the range to practice what techniques we had learnt in our own time and on whichever targets we wanted, which was great. Both David and I went through another 100 rounds practising a number of the techniques we’d learnt on the pistol, and really got it out of our system the frustration of not being able to shoot pistol in the UK.

This range had a great restaurant on site, so we didn’t lose as much daylight moving from the range back to the hotel and back which worked out well. The food was tasty and the portion sizes left nobody wanting more, in most cases, far too much food.

During the afternoon we got acquainted with the VZ58 once more.

Security drills and safety first then we got to hit some of the steels and targets practicing techniques, working malfunctions and generally putting the rifles through their paces. Bliss.

Again we went through more rounds than we should have done, but had a hell of a time doing it.

And also a Czech Vz-61 Skorpion…

Finished around about 4pm and headed back to the hotel.

Since we were around 15km from melnik we had a completely new hotel which was great. How they agreed to have so many British shooters coming through with muddy boots and stuff all weekend without once complaining to us was unfathomable, however the hotel was clean, staff friendly, and although the prices were slightly higher on the drinks than the last place we stopped at, it was a really nice stay.

Friday night most everyone else arrived, which meant we got acquainted in the hotel bar… Needless to say, there’s always someone who drinks a little too much and is worse for wear the following day. Well, that was me. I felt rough. 3 hours sleep and then up for 2 hours being violently sick until nothing left in my system. I’d blame the food if everyone didn’t have the same thing!

So a day full of shotgun fun ahead and a pounding headache for Ste, fun times. Still, I paid a lot of money to be there, I wasn’t going to let something like a searing pain in my head ruin the fun! Off to the range we went.

This time we put slings on the shotguns and headed on to one half of the range. The other half was being used for the Basic pistol class that we refreshed with the day before.

We went through safety, handling and manipulations of the shotguns. talking about when they’re useful for being used and where their use started.

We went through loading, unloading, checking safe, handing off weapons and types of ammo.

We also had an interesting demonstration of the shot patterns of each load at different distances. Birdshot, Buckshot and Slug at 5m, 15m and 25m.

We went through various drills with shotguns where we’d have to decide based on the distance which load to use in order to stop the target. including tactical reloads and how to load specific ammo in a hurry. Fun stuff.

We did some falling plate style competitions amongst ourselves whilst practising just before lunch.

If you’ve seen pictures of me, you’ll understand food is important…! haha, however although I’d forgotten about my headache for the entire morning whilst shooting when it came to food, I couldn’t stomach much more than the soup and a bit of the pork that was prepared, which was really very tasty. Again prepared at the range.

It’s at this point it seems my memory fails me, so apologies for the lack of details from here onwards, my hangover seems to have fogged my memory somewhat, and I’ve slept since then!

More shotgun drills and some pistol drills to get those who were not here on the Friday into shape and re-acquainted with the pistols ready for some parcours the next day.

Before the end of the day, we also had a go with some more firearms, namely I got to lie prone an AK-47 and let rip. We tried to get video of it, but it never happened, but that was a fun, fun, fun day!!

Here’s a photo of David with the AK…

Just before we retreated back to the hotel, but after the sun had started to set we moved on to basic use of a tactical lamp with pistols and the technique used when using a tactical lamp. An interesting and informative end to the day.

After all that running around and recoil therapy, we got back to the hotel to make use of its SPA facilities by heading to the swimming pool/jacuzzi for a few hours before heading to the sauna to sweat out the alcohol poisoning…

Feeling nicely relaxed we went to the hotel restaurant where we had some Czech Hot Stew meal which heated us up hotter than the sauna, but boy was it tasty! I think I was just glad I could eat again!
Then back on the beers, but I think I called it a night fairly early after learning from the night before!

We headed back to the range after a quick breakfast And got kitted out with the VZ58’s and Holsters. We did some transitions between weapons and shot many rounds before we realised we had a bit more time than we thought, at which point we did some advanced team technique, such as stacking and retreating fire, where the person at the front of the line shoots, sidesteps, then walks backwards until past the next person in line who then continues to shoot.

Probably the stuff with the most potential for danger as safeties are off at all times, even when directly behind the person in front, however the 4 gun safety rules still apply, so there are multiple redundancies for safety.

We practised this technique, a short sample of what’s involved in the team course that’s usually done over a week, until lunchtime, when we broke for more food (I like food….).

Parcours, the time of the weekend when we put all that we have learned about our weapons training into practice and run a course set out by the instructors.

We did a few runs each at the course, which involved the Glock, a “found” VZ58, More Glock and the Shotgun. Proper 3-Gun – Shotgun, Rifle and Pistol.

They say a picture says a thousand words, so let’s see what my “weekend-winning” run says in high def…

Cherry on top of a massive weekend!

As last time, special mention to Froggy from Full-Bore.co.uk for putting on a fantastic weekend and translating for us ignorant Brits. Also to Christian and Lubos for teaching us and making sure we didn’t accidentally shoot ourselves.

If the pictures are anything to go by, I certainly need to lose some weight, but I’m pretty sure I said the same thing last time…

Great to put the names to a few more faces from Full-Bore, too! Some of those guys were doing the basic training so we didn’t get a lot of time together on the range, but as usual, meeting different shooters from different walks of life is great and highly interesting!