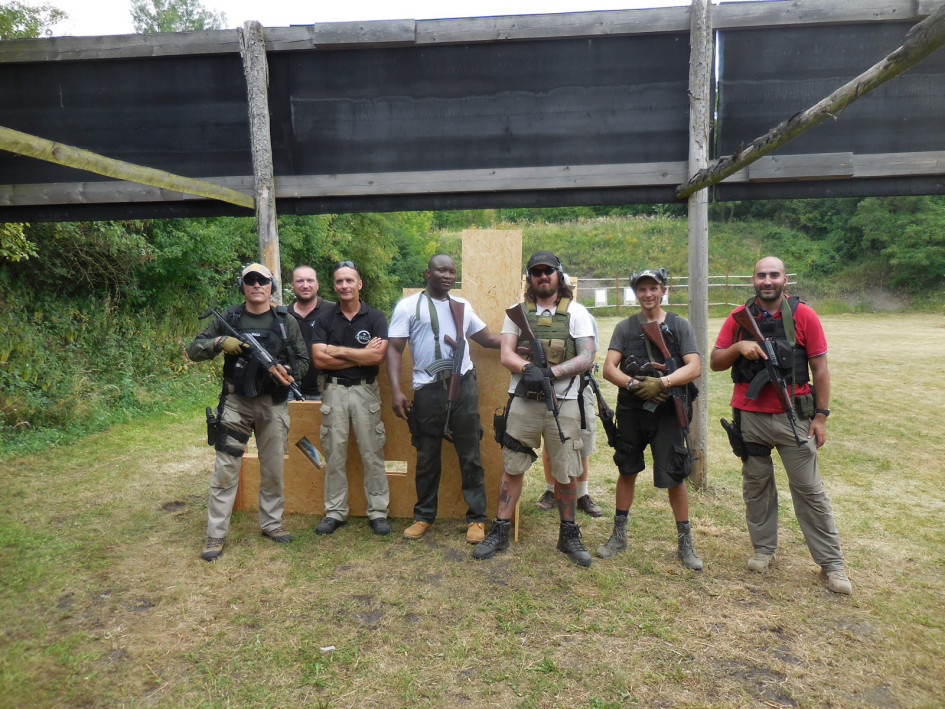 This last week I visited M?lník for the second time to improve my understanding of firearm manipulations and being able to shoot some disciplines which are not allowed in the UK, due to knee-jerk legislation (but that’s a story for another time).

This was all done with FAST Czech Republic consisting of Christian Goblas (Main instructor), Luboš Kulhavý (Instructor), and Brut (Instructor). Brought together and translated on the course where necessary by Froggy (Yves) from full-bore.co.uk.

We left on Thursday for late arrival ready for our course to begin on the Friday. What was laid out for us is as follows:

On the firing line with our Glocks

The first half of the morning was taken up by getting holsters and magazine holders attached to our persons and being shown the safe and correct way to pass weapons between each other. We were issued Glock 17 or 19’s (and in Dave’s case a Sig p225 as requested) and then shown how to load and unload the weapon correctly.

We shot a few rounds at the target and it wasn’t long before we were familiar with our issued weapons. So we were shown the difference between a full reload and the benefit of a tactical reload. Between each section we fired off plenty of rounds becoming ever more familiar with the weapons.

We were then shown how to deal with malfunctions, the major two being Stove pipes and double feeds. Being shown how to correctly reload in the first place passed along information which makes this procedure easier and automatic as movements are standardised and all for a purpose. Like fractions, all broken down to the lowest common denominator.

We broke for lunch and headed back to the hotel which was included in the price of the retreat.

I forget what we had, but everyday was soup followed by some kind of meat/sauce and dumplings, I think one day the dumplings were exchanged for chips. Ne’er was a vegetable in sight…! :p

We head back to the range, which was by this point baking. Got loaded back up with ammo and pistols and headed back out into the sun where we learnt fire sequences.

Double Taps, Failure Drills such as Mozambique AKA. 2 in the chest and 1 in the head and 2 in the chest and keep firing at the head, which from what I understand gets around some self defence laws where 1 shot in the head may be considered murder, but continued shooting is lawful as the head would still be in the sight picture. Not that this is relevant in the UK, but it’s nice to burn ammo!!

We did this until the end of the day where we were set a test which was to the standard of French Air Force Pilots (Since they only have pistols, it seems like it’d be pretty hard) but we all aced the test shooting the correct procedure and running drills on the weapon as instructed. Great day!

We followed up the shooting by returning to the hotel having dinner (more soup, meat and dumplings) and drinking beers which cost a grand total of 38Kc for 2, roughly translated to a £1. That’s 50p per half litre of beer. Oh yes, you can see why stag dos attend here.

Start the day with a fairly standard continental breakfast and off in the taxi to the range again.

First thing I had my “pudding”. Both times we have visited this course I have made a little request, knowing that Luboš has quite the collection of weapons, this time I asked if I could have a go with the 1911, my favourite handgun 🙂 He obliged and that’s how I started the day. Dave had a go too, since I didn’t get a photo of myself shooting it, here’s Dave!:

We drilled more failure routines to make sure that we definitely had them down and moved on to shooting whilst moving left and moving right, as if an attacker was coming straight towards us. Step out of the way, draw and shoot, following up to make sure they stop.

We had a competition on clearing a double feed using the correct technique and the first to put a double tap onto the target was the winner. I managed to pull of the win without missing a single step of the technique first with Froggy exclaiming at how fast it was. This made me feel awesome! haha.

We also learned how to shoot from behind cover, including tactics.

Then we had another competition, this time Parkour with the pistol. 30 rounds in the magazines, 10 targets to shoot from predetermined cover spots and running between. Did we mention it was timed?

The first attempt in my cocky way I offered to go first and put up the time to beat. I was aiming for 1 minute, but a cock up with misinterpretting one of the positions (I did say the instructors were french, right? :p) meant I had to do one position generic valium uk again and lost time. I managed 1.05 but was beaten by Yash who got 1 minute dead I think. Yash Wins

Rematch, I declare, and we all get another go, so I can rectify my mistakes. Still wanting under 1 minute I put everything into it and thoroughly pulled my finger out. Here’s the result:

Which we continued until almost lunchtime, at which point we had a go with a new toy, a Dragunov! Yet another rifle that we can’t own in the UK due to self-loading weapons that are not .22lr calibre being allowed legislation.

We head back again for lunch and water… lots and lots of water… over 35C in the shade and we’ve been out in the sun all day! I think todays lunch was chips and mystery meat…! :p

Since we had done the pistol training and were comfortable with them, out of the 6 of us, 4 had done the Assault rifle training previously and 2 had not, so we went through the process of converting the pistol techniques to the rifles. For those of us who had already done it, it was a great refresher course, but it definitely highlighted how multi weapon system adaptable the techniques are as those who had not flew through it with us with no bother whatsoever.

We spent the rest of the day burning 7.62×39 rounds in our VZ58’s and going through the first day pistol course lessons on the rifle.

All this in 38C now heat in the shade, but with added kevlar vests carrying 6 30 round mags, sidearms and sidearm ammo… We’re shooting guns though, our spirits will never be dampened…!

Ste Gough Fully Togged Up with VZ58 and Glock 17

We had the option of heading into Prague for the night, but as we were over 50km away which would have meant 2 hours travelling there and back in the taxi and £25 each worth of fuel to do so, we decided to stick around and walk around the ideallic village of M?lník, instead. Which in hindsight was a brilliant plan, as we got to see the area we were staying in which was really quite nice.

The best part of it being the morning, is there’s still a whole day of shooting left!

Breakfast, taxi, range, togged up in our equipment.

Straight to parkour for rifles only and ran some drills with them;

What a thrill! I almost shot the barricade, but luckily everyone shouted and saved me the €10 fine that Brut (who had made them) had imposed. Much to Christians dislike! haha! Thanks guys!

We spent the rest of the morning practising the technique for transitioning smoothly from rifle to pistol and back to rifle again. Many rounds were shot, and it was hot, hot, hot!

Inevitably back to the hotel for more soup, meat and dumplings… only this time it was rice and chicken with some kind of buttery sauce on it. Simple, but delicious!

My brain by this point was fried, I was exhausted after not enough sleep, dehydration and sunstroke, so I’m sure we did more, but the only thing I can remember doing in the afternoon was putting everything we’d learned throughout both previous days into 1 solid parkour session…

Rifles and pistols with transitions! Here’s my run.

I did a fairly respectable time of around 47 seconds, but got it absolutely smashed by Dave who managed 37, a clear 10 seconds off mine! Awesome stuff!

The last part of the day was clearing up our shot brass from 3 days, and clearing the range! Thanking and saying our goodbyes to the instructors then back off to the hotel to get showered clean and packed ready for the airport!

I had an absolutely amazing weekend again and the bunch of lads that we go with are a good bunch, friendly and all with very good sense of humour, which if you’re around me, you need!

Within the first day we were planning the next trip out to Czech, and I can’t wait to go back out.

Special mention to Froggy for putting it all together, and especially for helping me out last minute to assure I could go, and for offering me a place to rest my head so I could drive home safely on Monday morning. Definitely Appreciated!

Suncream was a good idea in July.

Camelpak was a good idea.

Hope you enjoyed reading it as much as I enjoyed doing it!!