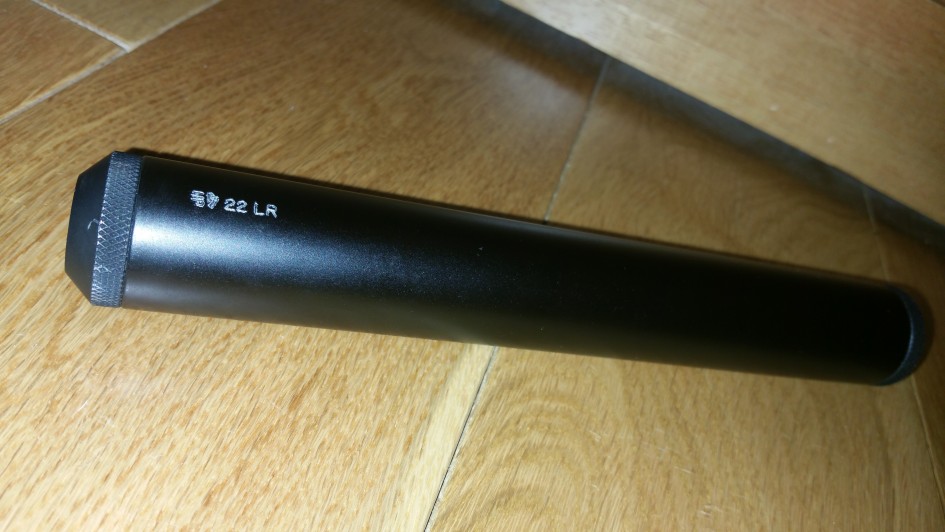 This is my father’s moderator. My first reaction was to ask what make it was, when he replied Sako, I couldn’t believe him as I had never heard of Sako making moderators before this, but it seemed like a perfect fit. Like me, he has an original Sako Finnfire.

There’s not a lot of information around the web on this particular moderator, so the information I have is slim, but I can tell you the dimensions and measurements.

It seems to be aluminium tube and plastic/synthetic one-piece internals.

This particular moderator has not been cleaned, probably ever, so my early attempts to take it apart have failed miserably as the end that attaches to the firearm is stuck solid. Since it’s not mine, I didn’t want to risk breaking it, so my attempts to pull it apart have been halted.

I do recall my father telling me that this is the second moderator of this make that he has owned, since the internals of the first one were shot out using high velocity ammunition, the RFD that supplied this replacement recommended only using subs in this particular moderator.

This is not meant to be a Laboratory test, but an effective, repeatable test that can be used to compare against other moderators.

To test the effective moderation of the Sako Moderator I took a sample of 4 rounds unmoderated to give a baseline average, and see whether the average was similar to the tests I had made previously. As with the other tests the rifle used was the same cut down heavy barrelled Sako Finnfire. The ammunition used is Batch Tested Lapua Centre X – This ammunition was the most accurate batch at 50 yards, one may speculate that is was therefore the most consistent, which makes it perfect for this test.

This ammo is deliberately sub-sonic. I don’t want the supersonic crack provided by some ammo to influence the SPL reading.

The test was conducted on a closed indoor range at 25 yards, the sound pressure measurement was provided by a Testo 815 Sound Level Meter placed 60cm from the muzzle at 90° with the microphone pointing directly at the muzzle.

*This average is 1.47db quieter than previous unmoderated tests. The same ammunition was used, same batch, same rifle fired from the same position on the same firing point and same SPL tester in the same location. I can only attribute this to the temperature, which was notably colder this time than the last 2 tests that I made. Previously testing was carried out at roughly 10°C and today’s temperature was roughly 3°C. Whether 7 degrees is enough to change the air density or the powder burn rate of a .22lr cartridge this much, I’m not sure. But it’s a theory. Hit me up in the comments if you disagree or have a different theory as to why the baseline is lesser this time round.

I then screwed on the Sako Moderator to the barrel and did the exact same test as outlined above.

This gives us an average effective moderation of 21.35 db(a)

And an approximate cost per DB of moderation at £1.40 per db(a)

I could find no manufacturer advice for this moderator at all, and sadly therefore no cleaning instructions. I would presume ultrasonic would be preferred method of choice, so long as the moderator is completely dry when reassembled. However with aluminium and plastic construction, rust is not a worry so this would be just good practice.

The effective moderation test within this article is for comparative use only, using the same methodology and equipment. This article is not compliant with any standardised military test or equipment. Figures should be used as rough guides. The author always advises the use of ear protection along with moderators as additional hearing safety. Once your hearing is gone, it’s gone. Be careful out there.