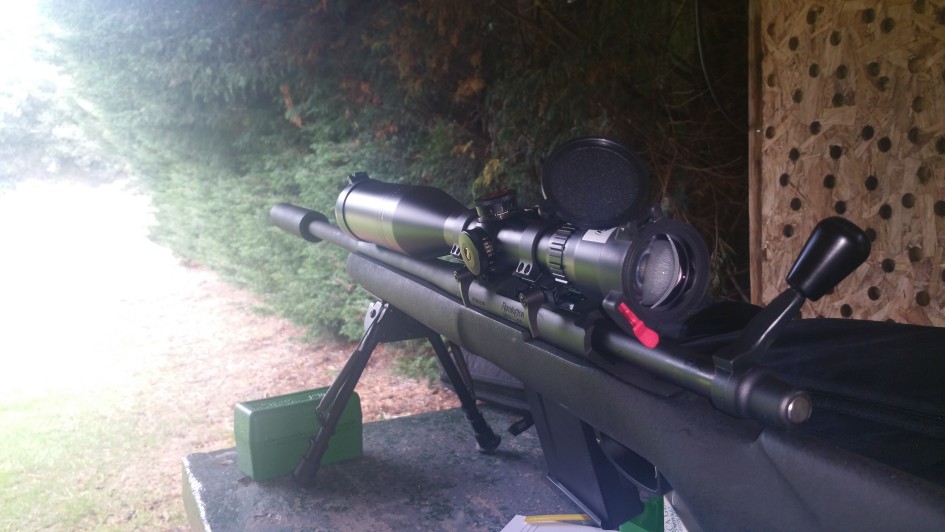 Following on from my Tier One Spartan 3 Moderator Comparison Review – .223 Blanks test a few weeks ago, I finally got chance to get to the range and do some Load Development for my Remington 700 in .223 since it’s improvements by Norman Clark Gunsmiths in Rugby.

My lack of rear bag and rifle control from the bench meant my group sizes were nothing to write home about, after 20 or so rounds through the rifle and moderator the mirage through the scope made it almost impossible to shoot accurately.

Nevertheless, after I was done testing my loads I had grabbed the decibel meter I used in the previous test and decided to lash up a quick string of shots to see the difference between the blank rounds I used previously and the live rounds I was shooting.

I used the same type of setup, the same rough positioning of the db. meter and the same Reflex, End of Barrel and without Moderator configurations.

I made a major mistake with the first round of tests, and since I only had 10 rounds or so to play with, I’d burned through almost all of my ammunition before I realised what I’d done wrong.

Instead of setting the DB meter to it’s highest setting, I’d set it to the lowest setting, therefore the gunfire was not registering correctly as it was overloading the db meter. 6 rounds wasted. Only 4 rounds left.

I reset the db meter, and put it on the correct setting and started again.

Too little data to make an accurate conclusion at this point. Too little ammo, too little time, too little forethought and planning to make it a comprehensive test. First Round “pop” might account for higher  than accurate readings however I’m almost certain that the sonic crack at a higher frequency that was cut by the ear muffs I was wearing is getting picked up by the Db. meter but not my ears as the moderation is quite considerable in both reflex and end of barrel configurations, but the readings were not showing the same energy dispersion.

In comparative terms I fired a couple of blanks unmoderated on the same range (Minsterley) and they registered at 118.9 db(A) and 119.4 db(A) respectively. Within reason the same energy levels as the one live round unmoderated I managed to get off. Which would indicate that my previous test with blanks, was not altogether useless. However, not enough data to draw a solid conclusion.

I’d like a bigger result group to draw more conclusive evidence but for now, it’s a start towards a theory.